Filmed and Edited by Paul Evans.

SGB (Sonny Green), hailing from Southend on Sea, is one of the new bright lights in HipHop. OneTaste as Sonny is he’d like to make a spoken word video with us and we are immensely proud to team up and make this kind of piece with him. Spread it, his message needs to reach far and wide.

For more work by SGB go to:
http://www.youtube.com/user/SGB94

This is an investigative poem about the criminal record of the British Monarchy. Heathcote Williams has devised a form of polemical poetry that is unique, no-holds-barred personal and political. It is a great collection of facts that most people are unaware of.

Can we go on bowing and curtsying to people who are just like ourselves? We begin to wish that the Zoo should be abolished.

That the royal family should be given the run of some wider pasturage – a royal Whipsnade. Will the British Empire survive?

Will Buckingham Palace look as solid in 2034 as it does now? Words are dangerous things remember. A Republic might be brought into being by a poem.

Written by Heathcote Williams
Narration and Montage by Alan Cox

To This Day > Shane Koyczan 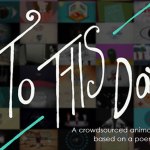 To This Day is a project based on a spoken word poem written by Shane Koyczan (shanekoyczan.com) called “To This Day”, to further explore the profound and lasting impact that bullying can have on an individual.

Schools and families are in desperate need of proper tools to confront this problem. We can give them a starting point… A message that will have a far reaching and long lasting effect in confronting bullying.

Animators and motion artists brought their unique styles to 20 second segments that will thread into one fluid voice.
This collaborative volunteer effort demonstrates what a community of caring individuals are capable of when they come together.
Watch the call for entries here: vimeo.com/56131212

Rumi, a 13th century Persian poet and Sufi mystic, has worldwide recognition. The name Mowlana Jalaluddin Rumi stands for Love and ecstatic flight into the infinite. Rumi is one of the great spiritual masters and poetical geniuses of mankind and was the founder of the Mawlawi Sufi order, a leading mystical brotherhood of Islam. Maulana Jalaluddin Rumi was a 13th century Persian poet, an Islamic dervish and a Sufi mystic. He is regarded as one of the greatest spiritual masters and poetical intellects. Born in 1207 AD, he belonged to a family of learned theologians. He made use of everyday life’s circumstances to describe the spiritual world. Rumi’s poems have acquired immense popularity, especially among the Persian speakers of Afghanistan, Iran and Tajikistan. Numerous poems written by the great poet have been translated to different languages.

This being human is a guest house.
Every morning a new arrival.

A joy, a depression, a meanness,
some momentary awareness comes
as an unexpected visitor.

Welcome and entertain them all!
Even if they’re a crowd of sorrows,
who violently sweep your house
empty of its furniture,
still, treat each guest honorably.
He may be clearing you out
for some new delight.

The dark thought, the shame, the malice,
meet them at the door laughing,
and invite them in.

Be grateful for whoever comes,
because each has been sent
as a guide from beyond.

The 4th World War is a powerful tale of the global justice movement at the beginning of the 21st Century told through poetry, interview, music and historical footage into a seamless journey into a portrait of international struggle.

“We walked and these moments changed us. We saw the buildings burning and the pain in our neighbor’s eyes. We rushed bayonets in the mountain and lines of police in the city.

We were touched by too much death. We loved and felt alive. We heard the echo of our word in other voices. We watched the moon rise over the barricades.

We were wounded by the courage of small children. This is not the whole story or the only story.

It is an introduction to some of the people with whom we share this planet.

A much greater story remains to be told. A story that we will write together.”