Poetry in Motion > a series of animated poems by Billy Collins

Untitled from design:related on Vimeo.

Noted for their intelligent humor, accessibility and observations on daily life, CBilly ollins’ popular poems come alive in a series of animated poems produced by JWT-NY commissioned by the Sundance Channel. Below, Collin’s describes how the project came about.

A videopoem tryptich by Swoon for the poems ‘Disturbance in the Maze’, ‘Wailing Wall Crumbs’ and ‘Ghostless Blues (The story of Vladimir K.)’ by Donna Vorreyer.

The three poems were written by Donna on a visual and aural prompt by Swoon (he also provided the titles as a hint or obstacle. By letting the three films guide her in the writing of the poems she gave the experimental films a story throughout her poems. And that was the experiment in the first place. I only added a few images or made additional cuts according to the reading or the poem.

HELIOTROPES documents the parallel goals of man and nature, through the most primitive and sophisticated means, to simply stay in the light.

Based on the poem by Brian Christian.

“Heliotropes” premiered at SXSW in March 2011.

The Beginning of Infinity > Jason Silva

THE BEGINNING OF INFINITY from Jason Silva on Vimeo.

“The adjacent possible is a kind of shadow future, hovering on the edges of the present state of things, a map of all the ways in which the present can reinvent itself.” – Steven Johnson

The mantra of the market…

39 Degrees North is a Beijing based motion design studio.
39degreesnorth.tv

Spoken word artist Joshua Bennett revisits the high school that sponsored his education to give something back and perform his latest poem.

Who Says These Words With My Mouth > Rumi

Who Says Words with My Mouth was written in the 13th century by the Sufi mystic poet Jalal ad-Din Rumi and translated and recited in our film by Coleman Barks.

To learn more about this series, visit www.4spFilm.com

Surrealistic vision of how love can be a Valentine’s day present. 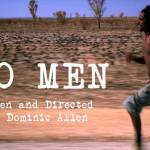 ‘TWO MEN’ is an award winning Australian short film directed by Dominic Allen and shot in the Kimberly town of Fitzroy Crossing by Joel Betts, features a robust and dynamic cast of indigenous Australian non actors. With an original soundtrack by Melbourne artist Felix Riebl and based on Franz Kafka‘s short story, Two Men Running, Allen’s short film has been screened internationally at film festivals including New York, Prague, London, Melbourne and Sydney and in 2009 was a Dendy Australian Short Film of the Year finalist.

The film was instrumental in supporting director Dominic Allen’s Emerging Australian Filmmaker Award at the Melbourne International Film Festival and the 2009 Inside Film Rising Talent Award.

2009 MIFF Jury member Deb Verhoeven remarked “Two Men proves that the simplest scenario can provide the perfect premise for conveying the most profound insights. But (Allen’s) key achievement is to understand that even the largest ideas are best told with brevity and the most serious with humour.”

Two Men was made with the support of Yiriman, a community initiated and community driven project supported by the Kimberley Aboriginal Law and Culture Centre which aims to build stories, strength and resilience in the Kimberley’s youth.

D’bi Young talks about eight principles that she believes can, and will, empower artists, particularly resonating with the needs of African artists.

Brought to you by African Centre
an Andover Yellow / Afritude Production

Mankind Is No Island > Daniel Spratlin

Mankind Is No Island from Daniel Spratlin on Vimeo.

‘Mankind is no island’ is a film shot entirely on a cell phone, using found signage on the streets of NY and Sydney to tell a touching story from the very heart of two cities.

The twin English  passions of football and William Blake are combined in this unique video poetry project for the BBC’s Poetry Season.

From movingpoems.com
“Continuing the theme of video poems that riff on television conventions, here’s a poetry promo from the BBC disguised as a sporting news story from the BBC. The poem is referred to as “Jerusalem,” but it’s actually from the Preface to Milton. A popular hymn adaptation by Hubert Parry a century after Blake wrote it is responsible for the new title, according to the Wikipedia.”

The poem was inspired by the apocryphal story that a young Jesus, accompanied by his uncle Joseph of Arimathea, travelled to the area that is now England and visited Glastonbury. The legend is linked to an idea in the Book of Revelation (3:12 and 21:2) describing a Second Coming, wherein Jesus establishes a new Jerusalem. The Christian church in general, and the English Church in particular, used Jerusalem as a metaphor for Heaven, a place of universal love and peace.

More poems by William Blake can be found here:

The Genius of the Crowd > Charles Bukowski

A short poem by Charles Bukowski, with a recording of him reading the poem, with most of the footage shot in New York.

Directed and edited by Rush
therush.com.au

Yelp > with apologies to Allen Ginsberg

Technology can be addictive. In a tribute to Allen Ginsberg’s classic 1956 poem, we created a short film lampooning the addictions of our generation. It’s narrated by Peter Coyote.

The filmmaking team behind “Yelp: With Aplogies to Allen Ginsberg’s Howl,” also made the 2011 Sundance documentary “Connected: An Autoblogography about Love, Death & Technology.”

You can learn more about both films at:
connectedthefilm.com