The second video poem in a series of TWELVE.
Written by Candy Royalle and created by Patch Sinclair

TWELVE (part 1) > And Then There Were Two > CANDY ROYALLE

TWELVE
ONE: And Then There Were Two

1. AND THEN THERE WERE TWO
“And then there were two…” is the first film in the collaborative cinepoetry project TWELVE.
Poetry – Candy Royalle
http://candyroyalle.com/
Music – Ashley Blackmore
http://ashley.blackmo.re/
Video – Patch Sinclair
http://patchsinclair.com/
Video Credits:
Clare Kelly
Margaret Walker
With thanks to:
Isaac Gallagher (Sculptor) – fire mattress. 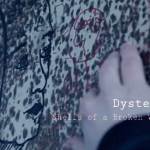 ‘Everywhere around me are shells. Shells of buildings, of cars, of machinery. This is a shell of a world’.

Dysteria is a short film based around a poetic narrative about a dystopic future,

for ‘Digital Graphics’ at Nackademin in Stockholm January 2011.