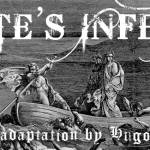 A poet regains consciousness in a terrifying dark forest. How can he ascend out of it? When he comes across his all-time literary hero (dead for 400 years) he realises he has a hell of a journey ahead of him…

It’s seven hundred years since Dante Alighieri penned his epic poem, Commedia, in which he describes in breathtaking detail a journey into three realms of the Catholic afterlife. So insanely inspired was this poetic undertaking, that swiftly after its printing its giddy readers added the epithet Divine to it, and ‘La Divina Commedia’ has never been surpassed in scope or style in seven centuries of poetry in any language.

Dante made use of a poetic form described as the ‘Dolce Stil Novo’ which translates as The Sweet New Style. He was determined to prove that the collection of unrefined dialects of the peninsula that we now know as Italy were just as appropriate for writing poetry as the Latin which all other writers of the time felt obliged to favour. He called this principle ‘De Vulgari Eloquentia’ – the Eloquence of Vulgar Languages (i.e. the eloquence of the vernacular). In exile from his beloved Florence, he set about writing the Commedia, and over the course of 100 canti, not only proved that the disparate dialects were up to the task, but effectively created the Italian language in the process, and immortalised himself to boot.

Over the epic journey, in effortlessly flowing and ingenious rhyme form, he shows the language’s ability to run the gamut of tones from the brutal and disgusting tortures of Hell to high flown and awe-inspiring visions of Paradise. So great was his prowess with rhyme, that he effectively placed himself at the top of the all-time great rhymers that humanity has produced for seven centuries.

However, when in the latter half of the 20th Century, in New York, an upstart group of young musical innovators gave birth to a style of music and a subculture called Hip Hop, all of a sudden, in the form of Rap, there arrived poets who took the art of rhyming to obsessive extremes, finally presenting a poetic form that, in terms of rhyming at least, could hold its own alongside and perhaps even surpass that of history’s greatest.

Immortal innovators of the artform such as Rakim, Talib Kweli, Eminem, KRS One, Mos Def, Nas, Notorious BIG, Tupac Shakur and Pharoahe Monch, took this rap rhyming to incredible depths, exploring all angles of their own vernacular, spitting intricate multi-syllable rhymed verses over irresistible hip hop beats and delivering their version of the Dolce Stil Novo to an insatiable world, and in the process proving, like Dante, that their Vulgar vernacular could have global relevance in its eloquence.

So, to this project. The basic agenda being simply to retranslate the Inferno using some of the forms of Rap – Multi-syllabic rhyme patterns, driving beats – to reengage with this epic medieval poem, and maybe contribute to garnering it a new audience. Of course, being a mere beginner in this art form myself, I have done my best to do justice to both the form and the source material. Any seeming deficiencies in either are in fact mine, and I apologise in advance.

With this in mind, I humbly present the first Canto of the Inferno, translated into Rap, using the hip hop mix-tape convention of rhyming over existing beats.

As references to the original poem, I have used the following editions

The Divine Comedy of Dante Alighieri Volume I Inferno, edited and translated by Robert M. Durling (Oxford University Press, 1996) – an excellent side by side translation with great commentary

The website Danteinferno.info which places the translations of Henry Wadsworth Longfellow (1807-1882), Henry Francis Cary (December 6, 1772 – August 14, 1844) and Charles Eliot Norton (November 16, 1827 – October 21, 1908) alongside each other for easy comparison. I have to admit I favour the Longfellow translation, and have made liberal use of his ideas for this piece. http://www.danteinferno.info/translat&#8230;

Finally, the superlative performance/lecture series ‘Tutto Dante’ from Roberto Benigni, in which he appeared night after sell-out night in the Piazza Santa Croce in Florence to deliver a commentary and reading (from memory) of the entire Inferno. It has been an indispensable resource, and is available on dvd http://www.amazon.co.uk/Tutto-Dante-0&#8230;

I would very much appreciate knowing if you feel this type of presentation is listenable, enjoyable and makes you curious to hear more.

An Ode To Ishtar > Hugo

Coinciding with Eostre, this is an Ode to that other Spring Goddess, Ishtar, in praise of the divine feminine in all its forms, but in particular Women the world over, and Mother Nature herself. A sincere prayer of thanks from a grateful Man.

I was asked by Philip Werner, photographer and compiler of the book ‘101 Vagina’, to write a piece for the exhibition and launch of the book. This is the result.

I have recorded it over the following music, which I respectfully borrow:

I have also combined the following videos together for the visuals