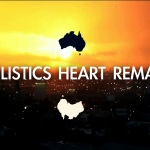 Australian hip hop artist JOELISTICS (Elefant Traks) is teaming up with Word Travels, Verb Studios and YOU to make an ‘open source’ video for his song ‘Heart Remains‘ – a sprawling spoken word journey into the Australian landscape and culture.

Watch the video call-out below:

HEART REMAINS is one of the standout tracks from his recently released album ‘VOYAGER’.

Written while on the road, Joelistics has channeled his feelings about his homeland into this epic ode to what he calls “my version of ‘I Love A Sunburnt Country’”. From the ghosts of history to the cities of the present to the stars in the red center it paints a portrait of a thousand faces of Australia.

Listen to the track here:

Joelistics wrote about the song for The Vine:

The beat for ‘Heart Remains’ was inspired by 90’s electronica—mainly Squarepusher drum programming and Aphex Twin’s collected ambient works. I wanted it to be a piece of music that was more of a long narrative than a verse/chorus/verse/chorus song structure. Over time the motto for the song became ‘Fuck dance, let’s art’ and with that in mind, I tried to make the synths at the end feel like looping memories.

‘Heart Remains’ is probably my favourite piece of lyricism on the album. It is a reflection on Australia, an ode to an idea and a dream that I wrote from a farm house in the French countryside.

I have such a profound love for this country and that love is always brought in to sharper focus when I’m overseas. The Australia that I romanticised in my mind is Aboriginal land; it is harsh and beautiful and deserted and it has sculpted a character in the people who live here. Around 8 in 10 Australians live within 50k from the coast on a continent that is 7,692,030km squared. Which equates to a lot of wild space. In a way, ‘Heart Remains’ is the only real love song on the record.
~

To create a truly diverse portrait of our country, Joelistics and SLAMTV are inviting the Australian community to contribute to this ‘Open Source’ video self portrait. It’s an open call-out to fans, artists, filmmakers or anyone with an HD camera or videophone to contribute their unique vision of Australia by uploading their own footage.

The final product will be a tapestry of video from across Australia, visualising the complex cultural landscape evoked by Joelistics ode to the Australian psyche, which will edited by Tim Parish from Verb Studios and launched at a special premiere screening of SLAM TV at WORDSTORM – The Festival of Australasian Literature in Darwin on the 11th of May, and then in Sydney at a special SLAM TV screening and performance with Word Travels @ The Rocks on Wednesday the 16th of May.

All contributors to the video will be allowed free entry to this screening!

-The HEART REMAINS OPEN PROJECT is a Creative Commons collaborative project, so when you upload your video to the group it is important that you approve the video to be used under a ‘creative commons share-alike’ license. Otherwise, we won’t be able to use it in the final video!

-In order to maintain a high quality for the final video, all contributions are encouraged to be HD format when uploaded. At the very least DV-PAL quality (720×576 16:9)

-Videos are recommended to be at least 10 seconds.

-Contributors may submit as many videos as they like.

Go to the Heart Remains Open Vimeo Group to check out the contributions and submit your own.

I Am By Virtue > Joel Ma Joelistics

Joel Ma AKA Joelistics, reads his spoken word piece ‘I Am By Virtue’ for an ABC Arts Program.